I Have Magic Powers (and So Do You)

Several years ago, maybe before I started using the Internet Nom de Clique MagicPantsJones, I was teaching two summer camps at my school. Fortunately, for my procrastinatory butt, it was in my classroom, a couple of weeks after school got out. This meant that I didn't have to pack everything up as quickly as normal. One of the camps involved taking things apart and making imaginary robots. It was fun and silly and very, very messy. There were screws, wires, and circuit boards everywhere. The day before camp got out, another teacher walked by my room, wide eyed, and said, "You're never getting out of here." "I'll be out on time," I answered, "I have magic powers." What happened in the next day wasn't some sort of Harry Potter spell, or even some mystical hokum. It was will. I'd declared something, and I did it. With the help of my campers, we took responsibility for the glorious devastation we'd created, and we made quick work of it in a short time on our last day. This, all to the surprise of my friend, who said, "I never thought you'd make it, but you did!"

Since that day, I've used the line again, and it works each time. If I just go about as normal, the results are normal, too. But there's something special about declaring extraordinary ability before taking on an extraordinary task. You could (should, even?) argue that what I'm talking about here is psychological, not magic. And as a mature education professional, my response to that is, "Yeah, so?" The definition of magic is influencing events by using supernatural or mysterious forces. Let's toss supernatural into someone else's bin for now. I don't want to dabble in that. But mysterious, that's a pretty broad word, especially when you consider psychology. For what we know of the brain, of personality, of how a lump of fat, water, and nerve cells seems to be the cockpit of our humanity, I think that mysterious is a pretty appropriate word. If you then extend that to talk about actions, emotions, and personal practices that yield irregular and extraordinary results, I think we can argue that we are certainly talking about a kind of magic. Most of us use this magic every day.

I want to explore the nature of this. Some things that we do yield extraordinary results, but we understand why, they're totally explainable. But some things, we can only explain in abstract terms. Love, Music, and Humor, for example, are golden in my book. We can talk about, write about, and analyze them, but they act in life like a multiplier does in a video game. You level up faster, you last longer, you earn more points when these powers are engaged. We've all got them, and we only partially know why they work. For the greater part, when people write about them, they're writing about the response to them, or the construction. But what's the middle part? That's the magic. It's the thing that we don't fully understand, the mysterious forces, that yields extraordinary results. It's the question mark in this diagram above from South Park.

In upcoming posts, I'll explore how different Magic Powers work in the classroom. Maybe if we can all harness a little more of our Magic, we can do more amazing things with our students. In the meantime, feel free to add Magic that you think of below, or maybe argue with me and tell me that I'm a naive doofus! 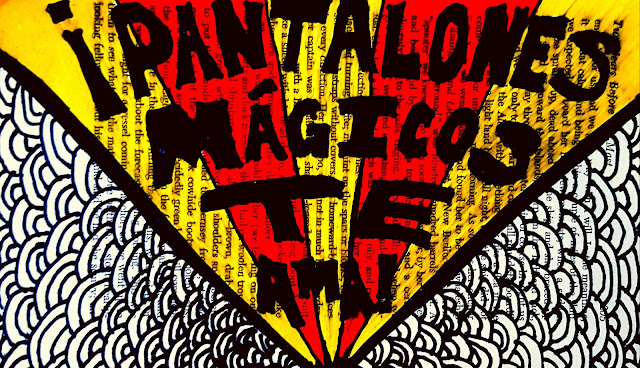 Posted by Our Gratitude Journal at 11:32 AM No comments: